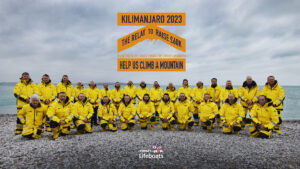 Just before Christmas I had the pleasure of chatting to Ian Barnaby (‘Barney’) from the Torbay RNLI crew. He’s been organising an epic charity hike to the 5,895 meter summit of Kilimanjaro hosted by Pioneer Expeditions.

The entire crew have been involved in some fantastic, gruelling fund raising events including swimming, cycling, rowing and even sky diving. The trek will be their final challenge and is being undertaken by 8 of the crew’s oldest members with an average age of 60!

On a day to day basis, it is impossible to stress the importance of the work the lads do and the dangerous conditions they face when they get called out to sea. The RNLI work is entirely funded by voluntary donations, so whilst we realise times are tricky for many we’d like to help Ian and his team reach their target.

Ian came to us at Pioneer Expeditions as they were looking for a small company who specialised in unique adventures and treks. We’ve been working closely with Ian and look forward to following their progress and making sure we do our bit to support them mentally and practically

The crew are largely self-funding their challenges so all donations will go towards their target.

I asked Ian some questions during a short interview. I found him inspirational and ‘well up for this Challenge!’

How did you come up with the Kilimanjaro challenge?’

“In 2019 I organised an endurance challenge, running for 24 hours around Brixham, to raise money for Prostate cancer. It was really popular with crew and locals and was a big success. After 2 years it was time to arrange another challenge. As there are several us in the crew of similar age, heading towards retirement but still with a good 3 years left on the boat, I felt there was sufficient time to organise something really big before we retired. We came up with the idea of climbing Kilimanjaro, a challenging task for a group whose average age is approaching 60. I talked the idea through with the station cox who felt it was a fine idea, but suggested we extend the project to involve all 30 of the station’s crew. So, we came up with a series of challenges open to all, and leading up to the Kilimanjaro climb.”

‘Was it hard to get the whole crew to participate?’

“We talked it through with the whole crew. There was wide support form everybody, although for some it was tricky to get universal commitment, because every challenge required participants to give up a fair amount of their time.”

‘How did you decide what challenges you’d do?’

“We opened options up to suggestions from the crew themselves – asking for tasks that would push them outside their comfort zone, but something they fancied doing. Like a bucket list. We wanted 5 tasks leading up to the main event of Kilimanjaro. The ones we chose were those that were most widely popular. We set them out as a sequence under the ‘Kilimanjaro Challenge 2023’ umbrella-name and launched the whole project in March 2022.”

‘What have you done so far and how were they?’

“In May last year, we did our first challenge, skydiving from 15,000 feet. – I personally didn’t want to do this one but did so because the whole point was to go beyond what we find ‘comfortable’.

The second task involved a team cycling around the Western Isles of Scotland. It was based on an event called ‘The Five Island Challenge’, which meant you had to cycle around each island in sufficient time to catch the daily ferry to the next island on the list. Miss the ferry, and you’d be stuck on the island. Luckily and with some effort, they didn’t.

The third event in July, was an endurance swim, completing a distance of 20km (12-13 miles) over two days. The team swam right around Torbay’s coast, staying together as a united group. Many of them were not natural endurance swimmers, which made this quite an impressive achievement.

The fourth Challenge required a team of guys rowing a traditional heavy-duty rowing boat, called a ‘gig’, which we borrowed from the Brixham Gig Club. The guys towed the gig all the way up to Scotland Caledonian Canal. They then rowed from East coast to the West along the Canal and its lochs, a distance of over 60 miles. They completed the task in 3 days, and then at the end climbed to the top of Ben Nevis!

The fifth event was meant to happen in November but had to be postponed until January. Four lads are going to live in a camper van, which they will drive to visit every lifeboat station across the Southwest – a total of 31 RNLI stations in all. They also have some local ‘challenges’ lined up with a few of the stations and even plan to go out on exercise with Padstow RNLI. They will finish up at RNLI headquarters in Poole after 3 days which will involve a lot of driving.”

“The sixth Challenge happens in February, when we head to Kilimanjaro for the headline final event.”

‘What have you done to train for these challenges?’

“Different groups of people volunteered to do and to support different challenges according to the time they had available. There was no restriction in how many tasks you wanted to do. Some guys have participated in more than one challenge. Equally, some tasks did require extra time be put into training. The key thing is that almost all the crew have now participated in at least one challenge, either actually participating or in a supporting role. It has been a whole crew effort.

Regarding training, each team has organised its own routines for each challenge. As for the Climb, we are perfectly positioned here in Brixham, with undulating coastal paths and a short distance from Dartmoor. This has made it easier to organise training days and weekends out in cold winter weather Both the Moor and Southwest coast path have been good for us.”

‘Do you have any competitive people? Does everyone get along!?’

“We don’t really judge ability or skills for any of these challenges because you can teach and train people if they are willing. We always get along with each other, even though the occasional long late nights out that inevitably happen on some shouts. I suppose some of these Challenges, and the training have had their moments when people have been pushed and things haven’t gone quite to plan. But usually these make for funny instances. I don’t think anyone’s temper has ever flared, and even if it did, it would be trivial, and certainly never taken personally. We want everyone to have fun! We all get along on the lifeboat, so it’s no surprise everybody has gotten along so well on all the challenges. We are also taking some real jokers with us on the Climb, so we look forward to the inevitable mishaps and plenty of entertaining banter.”

‘What are you looking forward to when going to Kilimanjaro?’

“I look forward to seeing the mountain for the first time. Photos can never do a place justice. Only in real life can you fully take in all its magic.”

‘Why did you choose Pioneer as a company to partner with?’

“We booked a holiday cottage in Dorset last year, which I found it on a very obscure website. So, my wife researched the place just to make sure it was legit and genuine, and as a result came into contact with Philip, the owner. She discovered that Philip runs an expeditions company. So rather than choosing a large operator in London we decided to go for someone more local. So, because we had come across Philip, I sent an email out and subsequently chatted with Laurenne Mansbridge (Partner at Pioneer), who was fantastically helpful. We particularly appreciate the personal touch, which we have received from Pioneer”.

‘What future events are you planning?’

I am kind of thinking I’d like to do one more! I still have 3 more years before I retire from RNLI. I have been investigating a few ideas, looking for something that maybe we can push to that next level. One option that’s piqued my curiosity is the ‘Island Peaks’ in the Himalayas… but, I’m open to suggestions! 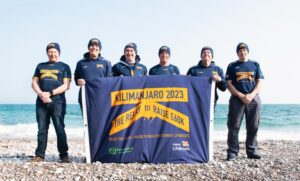 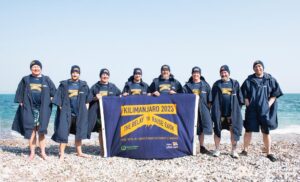 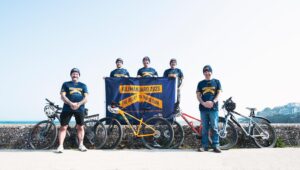 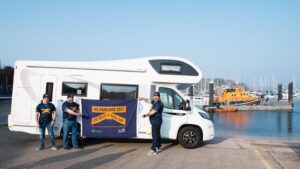 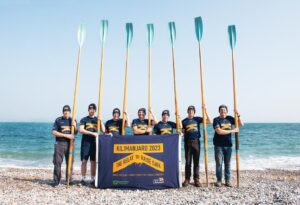